Innovations in Strawberry Growing Mean Improvements for the Industry 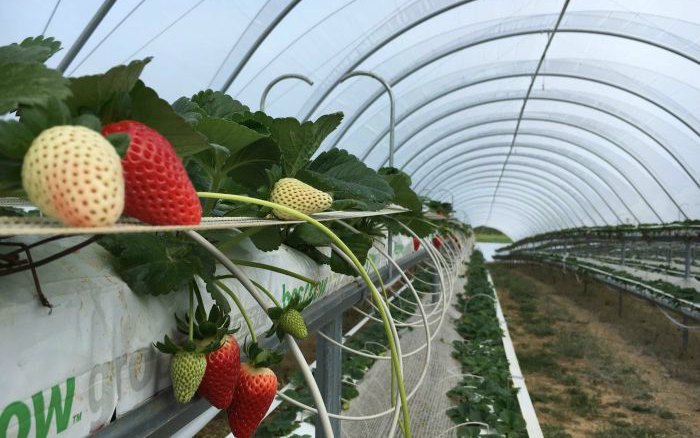 Imagine being able to halve your labour costs, drastically reduce disease and chemical use and protect your sweet soft crops from the elements.

A Queensland strawberry growing family is hoping to achieve all of that by taking strawberries out of the ground. In Piñata Farms’ fields at Wamuran, nine long white polytunnels, stand 4 metres tall and 8.5 metres wide. Inside 95,000 strawberries plants are growing in a sterile coconut husk mix in easy-to-reach house gutters raised off the ground.

Gavin Scurr said he and his brother Stephen have invested $1.1 million building the experimental tunnel set-up for their winter crop at Wamuran and summer crop in Stanthorpe. “It’s $460,000 per hectare, so very expensive to do on a largescale, but we’re trialling ‘substrate’ strawberries to see how we go,” Mr Scurr said.

“There’s a couple of things that we’re chasing. One is labour, labour’s getting a lot harder to get in horticulture in general and strawberries are no different.”
“By putting them in gutters up off the ground, they’re a lot easier to pick and our initial harvesting costs at the moment are running at nearly half the cost of outdoor, so we now effectively need only half the amount of labour, or we can do twice as much with the same labour.

“They’re up off the ground so the air can get through them a bit more so we’re seeing a lot less disease and obviously the polytunnels protect them from the rain and the dew so that helps significantly with disease.

Photo: Juicy varieties like the Albion strawberry, which is vulnerable to the weather, grow well in the polytunnels. (ABC Rural: Jennifer Nichols)

“There’s a combination of things about growing a better, healthier plant and then it’s cheaper to harvest going forward.”

However, the plan is no cheap feat. “This is our first year and we’ll see how it goes again next year before we put any more in but at this stage it looks pretty promising,” he said. “Based on what we’re currently getting we think we can pay for these, just in labour savings, in about five years — and any other benefit that we get either in improved quality or improved yield is a bonus.

“It is a financial risk and we’ve got to convince the bank to give us the money to be able to do these sorts of things but we want to be a long-term supplier of strawberries.

“We’re still relatively young and want to keep growing strawberries for a long time yet and I guess the availability of labour, the cost of labour is certainly a motivating factor for us, we need to try and get some costs out of our system. “Once we put this infrastructure in it’s there forever so we get the ongoing labour savings out of it and also the industry is becoming more and more sensitive to chemicals. “Australian consumers don’t want chemicals on their fruit, so if we can grow a better product or as good a product with less chemical that’s a positive for consumers, it’s a positive for the environment.”

Gavin Scurr said so far, the polytunnels had reduced chemical use by 80 per cent, because the controlled conditions have significantly reduced fungal disease.

Photo: The transition area between ‘in ground’ and ‘in gutter’ grown strawberries in the polytunnels. (ABC Rural: Jennifer Nichols)

“The botrytis, the grey moulds, that come with rain is something that we’ve massively reduced in here because the fruit doesn’t get wet. “The fruit’s got this beautiful gloss on it because it’s been in a protected environment compared to outside. All these things contribute to a better product.” It has been a tough year for south-east Queensland strawberry growers, with production down by as much as 40 per cent at the start of the season because of warmer weather and winter rain events damaging crops and fields.

But under the polytunnels, the fruit was protected, including strawberry varieties being grown in the ground as part of the trial.

“The question that needs to be answered is whether it’s actually viable, unless we can grow it cost effectively in here it doesn’t stack up,” Mr Scurr said.

The polytunnels protected the crops against significant rain events earlier this year and are designed to withstand hail up to four centimetres round. “This region doesn’t get a lot of hail, but when you do it can be very damaging and our season last year finished because we got a hail storm in late September,” he said.

“While they’re new we’re expecting them to protect us from hail, once the plastic gets a bit older and starts to break down, in a few years time it won’t be as robust but they’re all the sorts of things we need to prove,” Mr Scurr said.

The tunnels also allow for investment in softer varieties of strawberries, like the Albion.

“The Albion is a very good variety flavour-wise but one of its downsides is it’s very susceptible to rain. It doesn’t like rain and that’s fairly typical of strawberries, the better the flavour the softer they are, which means the rain has more impact,” he said.

“We thought well if we’re going to grow something in a high-cost environment we really want the best and hence the bulk of our production on the substrate is Albion. “They eat fantastic, they look good and even though we’ve had a small volume so far the customers that have had them have been rapt. “Other parts of the world have gone this way so I think it’s inevitable that we will end up this way as an industry.

“We thought the sooner we start learning to grow in these conditions, the better it will be for us and also for the Australian industry, it needs people to have a go at things like we’re doing. “Plenty of other strawberry growers have been innovative in doing other things as well and it’s good to have some examples of what things could be like in the future.

“It’s always exciting to do something new and something different. “It’s certainly a motivator for our staff. Our staff are proud to be involved with a company that’s trialling new things and new initiatives and that alone helps you attract staff.

“They want to come and work for us, rather than a job somewhere else, which is good but it all comes down to economics, whether we keep doing it.”