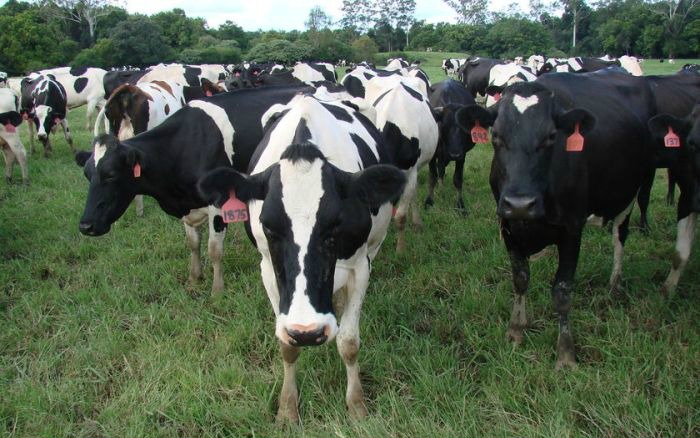 Despite the challenges posed by deregulation, droughts, floods and cyclones, Queensland Dairy Organisation president Brian Tessman said farm gate prices had generally remained steady ad overall the season had been reasonable. Towards the end of the year, there was good news when the Global Dairy Trade (GDT) index started to climb after falling to a five year low in September 2015. The GDT is a trade-weighted index of 30 different dairy products traded around the world.

He also said the Australia-China Free Trade Agreement would offer a range of opportunities for dairy exporters and should have flow-on effects for the domestic milk market. I’ve just started off with two cows, so hopefully as time goes on I’ll be able to add more in and get a bigger stud going.

Young dairy farmer, Ariah Edwards “Over the next few years, the changes in tariff levels should see [exports] benefit significantly and if their prices go up on farm, that should have some positive impact up here in Queensland,” Mr Tessman said.

“On top of that, there is product going out of Queensland and northern New South Wales into China. “The prices that are on offer in China for dairy products are many times what those products can be sold for in Australia.” However, despite the positive signs, Mr Tessman said Queensland’s annual milk production declined further this year.

Rising electricity and feed costs have also eaten in to any return Queensland dairy farmers have made. Lockyer Valley dairy farmer Luke Stock has tried to find new ways to save money throughout the year. He said feed costs were his biggest expense. “Anything that we can do to bring that margin over feed costs down is profit in our pockets,” Mr Stock said. “We try and grow as much feed as we can and try to take off 100 tonne of grain per year.”

The domestic industry took a significant hit when plans for a massive new dairy and milk powder factory, to be located in the Mary Valley, north of Brisbane, were put on hold. Mining magnate Gina Rinehart announced she would invest $500 million in the project with China National Machinery Industry Corporation to produce infant formula. Investors estimated the factory could produce as much as 30,000 metric tonnes a year. The company never gave any details as to why it decided to put the milk powder plant on hold, but did suggest in a statement that economic factors were at play.

Mr Tessman said the announcement was disappointing for producers throughout southern Queensland. “It certainly had a lot of promise because it was not only going to set up a dairy that was going to supply an infant formula plant, it was also going to take in milk form surrounding farmers, both in the South Burnett and the Mary Valley,” he said.

“All the local governments in the South Burnett and the Mary Valley will be hoping for the project to happen and get back on tack some time in the future.” Despite the highs and lows, there were still many young people keen to make a go in the industry. Ariah Edwards, aged 14, took out the 2015 Royal Queensland Show champion juvenile exhibition category in the dairy section.

Her family run a dairy north of Brisbane and she has already begun to develop her own future in the industry. “I have a private stud [and] I’ve just started off with two cows, so hopefully as time goes on I’ll be able to add more in and get a bigger stud going.”