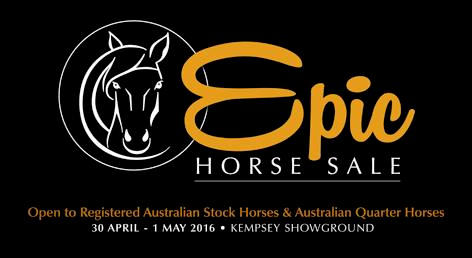 The Macleay Valley Coast’s agribusiness sector was given a major boost over the weekend, with the results of Kempsey’s first ever Epic Horse Sale exceeding all expectations.

Event organiser, Midcoast Rural Agencies principal Mark Haywood, confirmed around 400 horse enthusiasts attended the two-day event at Kempsey Showground, with around 150 registering to bid and 46 of the 52 registered stock and Australian quarter horses going to new owners on the day.

“Midcoast Rural Agencies has seen and acted on the opportunity to resurrect the very best of our community’s rural heritage with the inaugural Epic Horse Sale,” Cr Campbell said.

While over 80% of the horses sold were to locals, buyers came from as far away as Queensland, the Northern Territory, Tamworth, New England and the Hunter and Nambucca Valleys. The average price per horse paid at the sale was $6250, with Hunter Valley mare Coladdi May B Brown fetching the weekend’s top price of $16,000 from a local Macleay Valley Coast buyer. The good news for the Macleay is the sale will be back next year and with it, a major camp draft event.

“This first ever Epic sale was well and truly above all our expectations,” Mr Haywood said.

The target for next year’s event is 100-150 horses, with an anticipated 500-600 attendees and a three-day program including an incentive camp draft event on the Friday preceding the weekend sale.

While a date has not yet been set, Mr Haywood said he predicts it will be around the end of April. Mr Haywood said his goal is to restore Kempsey’s former reputation as the town of horses. Part of this reputation was built on the back of famous Australian stockhorse Abbey, a champion born at the back of the Willawarrin Hotel in 1955.

“Abbey has given us a legacy of 33,000 descendants, some of whom took part in the Epic sale,” Mr Haywood said.

Cr Campbell said the event had brought a lot of investment to Kempsey.

“Visitors bring dollars to local businesses, including our accommodation houses, restaurants, petrol stations and retailers and give us the chance to showcase our place and our people.
“Council congratulates Midcoast Rural Agencies on the success of this event and fully supports their efforts to bring an even bigger and better event to the Macleay in 2017,” Cr Campbell said.