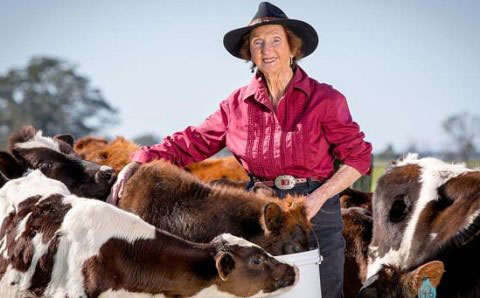 MOST people take up aerobics or running to keep fit — Marie Farley prefers to milk cows.

And at the age of 85 she has no intention of slowing down.

Mrs Farley wakes at 5.30am most days, as she has for the past 60 years, and milks 110 cows on her family’s dairy farm in Kempsey, on the NSW mid-north coast. It is a process she repeats at night.

“I do it because I love dairying. It keeps me fit,” she said.

Mrs Farley grew up on a beef property at a time when children rode horses “12 miles” to school.

“Everybody did it back then. It was nothing unusual,” she said.

“But if it happened today it would be a novelty, and they probably wouldn’t let you.”

When she married her husband John, a third-generation farmer, in 1951 she traded beef cattle for dairy.

She said it was not a job for the faint-hearted.

“People don’t realise you have to milk twice a day.”

They first started milking about 30 cows by hand and would have to separate the cream from the milk to send to the butter factory.

But then mechanical operations were introduced, making life easier.

Back then it would take 10 minutes to milk each cow, now it takes less than two minutes.

Over the years Mrs Farley has not only had to juggle raising nine children while working the farm, but has also battled “far too many floods to remember”.

In 2000 she swapped jobs with John, who had knee surgery.

“He took over the kitchen and I went out to the farm. He was a great cook,” she said.

John died five years ago but Mrs Farley continued to work the land.

Her son Paul has since taken over running the farm and, while her daughters nag her to fully retire, Mrs Farley is determined to keep dairying until her body gives way.

“What else would I do?” she asked.