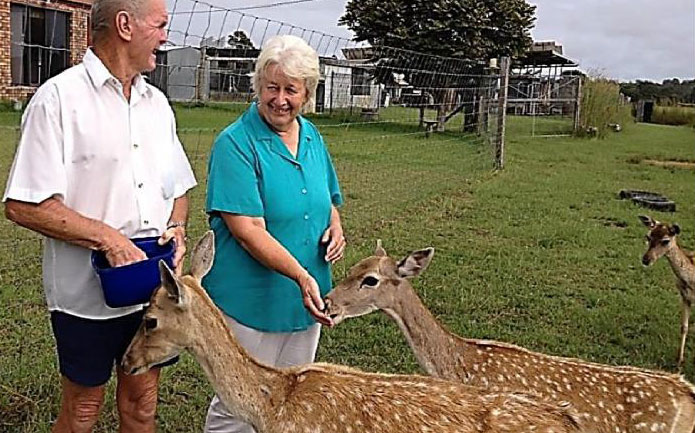 The Macleay Valley was once home to one of the largest farmed deer populations in Australia, but low domestic uptake and challenges in developing the export market saw numbers decline. Mesopotamia Lodge is one of the two remaining commercial breeders locally and has diversified its operation to meet the needs current market.

Owners Neil and Margaret Burke have an abiding love of deer and it’s easy to see what sustains their interest in these gentle animals. The couple relocated their herd to Spooner’s Avenue in Kempsey in 1991 with the vision of developing farm tours, on-site catering for groups and accommodation. That dream has been well and truly realised with all the facilities and amenities in place.

Margaret recounts. “The first booking we received was for 25 journalists looking at the Tourism Options on the Mid North Coast. At that stage we were still in the construction process so everything was fast tracked to make sure we were ready. It went so well that we started taking regular bookings with our biggest being a Christmas lunch for 77 people from the Gold Coast.”

The couple offers morning and afternoon teas as well as the tours and lunches which means visitors can enjoy a diverse experience. The Mesopotamia property specialises in a cross breed of Fallow deer and the Chital deer which originate from India. They also have a few Rusa deer from Indonesia and Black Buck antelope.

“Before starting the herd I went to New Zealand to see their deer industry and decided to import Fallow deer semen. At one stage, Fallow deer were thought to be extinct but a small herd was found in Iraq and a few were taken to Germany which became the start of the commercial population. Venison is very popular overseas but hasn’t found a strong market in Australia as yet. Once people taste it they really love it,” said Neil

Neil and Margaret have many passions and interests with Neil being an avid breeder of finches and parrots. The aviary he has constructed would sit comfortably in many established commercial sanctuaries and is home to a stunning array of birds. Beyond their commitments around the property, the couple is involved in a number of voluntary activities and were recognised with the Australia Day Achievement Award last year and received the Wayne Smith Medal from the International Friendship Force for exceptional leadership in promoting friendship.