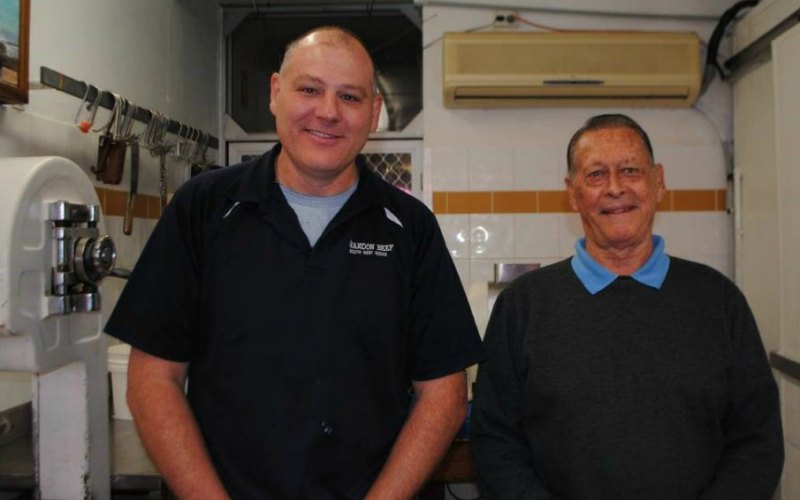 “That’s how it was in those days,” admits Colin.

“He said ‘I’ve got to have work for these fellas’ and so he bought a business.”

The boys were flat out straight away with a huge demand for their products sourced from their own cattle. Fast forward to 2016 and Ball’s Butchery has won numerous awards and is celebrating 65 years in business this month. Colin is still involved in the business and like his father before him, he has provided two of his own sons, Grahame and Geoffrey, with a full time livelihood. Today they operate two butcher’s shops located in South West Rocks and Kempsey. It all began for Colin at the age of 14 learning his trade from Nelson Cooper on the slaughter room floor. In 1963 a second shop was opened in Gladstone which Colin ran for 11 years. It was busy times for the local butchers back then.

“There’d be 154 people on Friday to deliver to,” laughs Colin.

“You’d be running everywhere on Fridays.”

Colin’s father passed away in 1965 leaving the business and his cattle grazing property, Longreach, to his sons. In 1970 they built an abattoir at Longreach and in 1974 they closed the Gladstone branch but opened the Kempsey store.

There have been numerous changes over the years including selling Longreach, which had been in the family since 1862, and the passing of Kevin. But Ball’s Butchery is still very much the family business it started out to be.

“My two young fellas walked straight into a job when they left school,” said Colin.

“It’s a real family business with ups and downs but we’re battling on pretty well.”

With 100 acres at Clybucca, Colin still owns his own cattle to supply the stores through the brand name Arakoon Beef and he still serves generations of the same families that have purchased their meat from the Balls since 1951.

Colin, who turns 80 in March, readily admits the industry has changed dramatically in the past 65 years.

“Years ago people would grab a piece of roast beef and cook it and create five different meals out of it.

“Today people want to buy it sliced and in packets.”

“We never missed a delivery even in the floods. Van or boat we just had to get the meat to the people.”

“Nothing is a problem when you’re in business,” laughs Colin.

“We’d still jump over the moon for our customers!”

Ball’s Butchery was established in 1951 and currently has two retail shops and a rural fattening property at Clybucca in the beautiful Macleay Valley. This is where cattle are hand selected by the team to be sold at Ball’s Butchery.

The butchery is celebrating 65 years with the introduction of a delicious new product. Since April the team has been busy shucking fresh oysters from the beautiful Macleay river and is proud to be able to offer this local produce to the Mid North Coast.

Previously known for their Arakoon Beef – their livestock pasturing on a rural property at Clybucca – the butchers at Balls were the original founders of the ‘paddock to the plate’ ideology, raising the cattle on their fattening property, processing the meat products themselves and bringing them to you fresh for purchase in their retail shops.

They encompass the three tier idea of a business being able to provide you with everything under one roof.

Now they have taken it to the next level.

Oysters are now processed at the upgraded South West Rocks facility where they have expanded their business to become a food processing plant.

Oysters and beef are both being produced locally and can be purchased at their two retail stores, in Kempsey at the Mall and at South West Rocks on Paragon Avenue.

Oysters are available for purchase all year round and are the finest quality Smokey Cape oysters.

During the Christmas season, Balls Butchery has their own ham available; the pigs are raised on their rural property and cured by Stokes Butchery in Wauchope. Order yourself a succulent ham this year.

Balls Butchery has won many awards in North Coast and NSW Butchery competitions.

With their new oyster processing facility, they are the first butcher in Australia to offer this level of service, bringing you surf and turf from one location. This is exciting for customers and an innovative move for the future of the business.

The new “surf’ side has really taken off in the last few months and they expect this will continue with the season changing into summer time.

The future of Balls Butchery is all about growth and customer satisfaction for a long time to come.